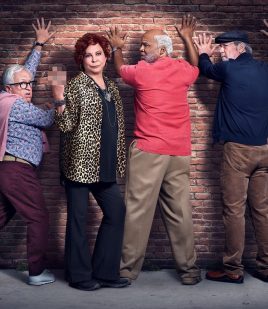 I enjoy the new television season.in the fall. Dozens of shows try their best to make it to the evening line up. Most of the new crop is stinky. Some are merely okay. And some are pretty good.

Now and then there are some that hit pretty close to your life. And it’s creepy.

For those who don’t know, Cool Kids is a new show about four “seniors” living in a retirement community who are sassy and a little troublesome. The most recent show was about one of the main stars (Vicki Lawrence) turning 65 and how she didn’t want to even acknowledge it. The foursome went out to a dance club and had a great time embarassing themselves before they went out drinking and met for breakfast the next morning in sunglasses.

65 and wanting to believe 65 is not old. And going out and doing crazy things to prove to themselves they are indeed as young as they feel. Which, in the end, was strained back muscles when they stood up and headaches in the morning.

Does that sound familiar or what?

I’m afraid I identify too closely with these oldsters. They say and believe the things I say and believe. They laugh and pick on each other and get sassy and throw parties they’re not supposed to throw. They fear getting old and being forgotten once they pass. The show didn’t get into grandkids or working past retirement age. Perhaps those will be touched in future episodes.

But what they did talk about and complained about sounded a lot like me.

Vicki Lawrence is 69 playing 65. The other actors are 62, 63, and 75 respectively. All within my age sphere. Their characters — and probably the actors themselves — have been there, done that. And so have a lot of us.

Of course, my life on the big screen will come crashing down once the show is cancelled.

But for now it’s fun watching the female lead talking about having a Peanut Booze and Jelly sandwich for lunch.