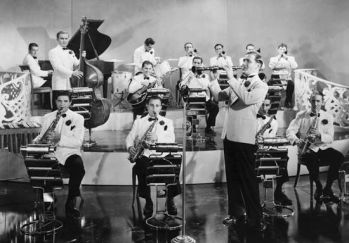 As I watch and wonder about the generations following me, I wonder if they will ever appreciate the simple things that were a part of their parents/grandparents/great grandparents lives.

I just watched a movie made the year I was born…Hans Christian Anderson. I haven’t seen this oldie for many years. And I found I could still sing all the words to the songs…The Ugly Duckling, Wonderful Copenhagen, all the wonderful nonsense sung by Danny Kaye.

These days my kids and grandkids would say Danny Who?

Like the songs in old musicals. 76 Trombones. Luck Be A Lady Tonight. Some Enchanted Evening. I Got Rhythm. Songs from musicals today’s kids probably never heard of. Simple, enchanting songs. Nonsense songs. Sing along songs. Offhand I don’t know if high schools do a musical every year; I know my senior musical was South Pacific.

I also love big band music. Say those two words together to someone younger and often they look like they just bit a lemon. They’re heard of it, kinda, maybe, I dunno. But it’s like time travel. Slipping backwards into a black and white world where love conquers all and true romance is two people singing love songs to each other.

Of course I know that underneath this band-aid of time travel and music and daydreams is the real world of infidelity, rape, scandal, neglect — all the things that musicals tried to escape. Now the only place you can find big band is on Sirus radio, or on AMC Classic Movies.

Today’s generation may know Frank Sinatra, but unfortunately  that is merely an iconic name like Elvis and Abraham Lincoln. Not many will take the time to explore the musical worlds of the 40s and 50s, for their own world’s musical creations exist, and what’s more important to a generation than their music?

Maybe that’s what evolution is all about. We can’t expect the next generation to cherish what we cherish. That’s why we drive around in cars instead of chariots. The times must change.

But all I can say is they’re really missing something.

But then again, they could say the same thing about Eminem.

2 thoughts on “The World of Musicals”