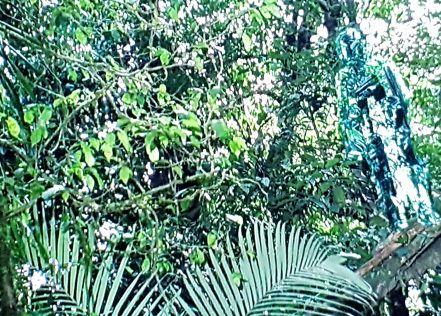 I was watching TV the other evening. A horror flick. Or SF. Or both. No matter.

Predator. You know — the Sci Fi movie with Arnold and a bunch of special forces macho men. You know the story line — the alien who comes to Earth to hunt humans for sport.  Well, there was one scene closer to the beginning of the movie that made me pull out a camera and take a picture of the TV screen — a scene that flashed the words blog topic into my brain.

The men are walking through the jungle, in and out of clearings, when one of the soldiers stops. Just stops and looks ahead. At the trees, at the jungle. Silence. When asked what was up, Billy said there was something out there watching them. Something you couldn’t see.

That kind of terror gets to me much more than blood and guts.

The fear of the unknown.

Some people can sense something’s not right way before it hits you like a pie in the face. We all have intuition, but some just live with it turned on high, while others barely crack the surface.

Do you ever sense things that are — unnatural? Nebulous? Out of our sphere of reality?

I don’t care for the scientific explanations. I understand them, I agree with them. But that doesn’t stop me from wondering — what if something was watching us? Something invisible, fifth dimension-ish and all that?

I’ve seen dogs avoid places in the wild; some would rather pee on themselves than check out some particular place. I’ve heard stories of birds avoiding certain trees and wild animals refusing to walk through certain areas.

It’s like seeing something out of the corner of your eye. If you turn and focus, the thing is gone. But for that fleeting moment you swear there is someone there. It is hearing songs on the wind when everyone else hears a lawn mower. Or seeing a glow in the woods that everyone else says are lightning bugs.

I know that none of these abnormalities exist — at least not on a scientific level. The guy I dated 40 years ago dashed a lot of my airy faerie ideas out of my head when he insisted science is much more fascinating than imagination.

But through the years I’ve regained some of my fascination with the “unknown.” I love to entertain the impossible. The improbable. The ridiculous. For within those worlds lies even more remarkable truths. At least for the person experiencing them.

I have never seen the clear, wavy distortions of a Predator before they become visible. I’ve never seen a unicorn drinking from a stream or a faerie dancing through the night.

We all see things that aren’t there. As we get older and memories fade, what we think we remember isn’t necessarily what happened. The conversations change, the situations change — we rework the past to fit our current psyche. So what I thought my father said before he died might not have been what he really said. The punchline of an old movie might not be the quote I spout out to friends and family.

To be honest, I am spooked by things I don’t understand. I don’t like walking through the woods in the dark, or driving down unfamiliar deserted roads at night, or playing Mary Worth in the mirror. Whether it’s an overactive imagination or the true sensing of something beyond reality, I prefer to deal with the unknown my own way.

I figure don’t tempt the gods.

5 thoughts on “Something Is Out There”