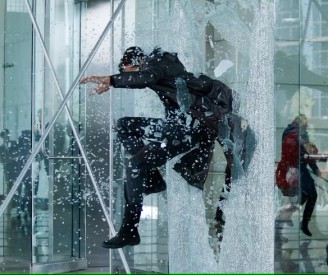 It’s funny how often we are expected to suspend belief in how things work in order to be entertained.

I myself am somewhat a “duh” when it comes to technical anything, so I am one of those people who barely know the difference between possible and impossible. Real experiences and CGI. Possibility and Impossibility.

I am one of those people who watch movies and  say “Can they really do that?”

There are many movies in which what they’re doing is impossible. Liquid nitrogen freezing bodies instantly. Stealing $160 million from a casino right under security’s nose. Hijackers taking over Air Force One. Outrunning fireballs and jumping through glass walls and not getting cut. Hacking government computers.

I mean, all those ideas help move the plot forward. What’s more exciting than a tank of piranhas eating someone alive in an instant? What’s better than hot wiring some ancient alien rig to so you can ride like a cowboy across the land? Or riding on a cable from one flying airplane to another before it runs out of fuel?

I love being entertained. And I love watching something that sits right at the edge of impossible.

Now, I know there is no such thing as training raptors or landing on a space station half way between the moon and earth. That there are no such things as three-headed dogs or fire-breathing dragons. No such scenarios as ghosts befriending homeowners or dogs that talk.

But through the magic of today’s technology, all of that is possible.

For all the madness and sadness around each of us, it is still a wonderful time to be alive. Anything you can imagine, movies can create. You can really feel like you are hacking through the middle of the jungle, wandering through the ancient pyramids, standing side-by-side with the emperor of the Qin Dynasty, or walking deep under ground through the worlds of dwarves.

Books have been around for centuries, successfully spinning the same sort of tales, but only in the last 20 years can you actually see something that does not exist.

How they do it I have no idea. Like magicians and their tricks, I’m not sure I want to know how it’s done. I’d rather float in the pool of ignorance and have a good time believing the impossible.

There is nothing wrong with being fooled by the magic of technology and the possibilities of the mind. The singer/actress Cher sums it up best:

“Until you’re ready to look foolish, you’ll never have the possibility of being great.”

2 thoughts on “I Love the Impossible”