The salt throne or salt chair is often associated with its origin in Russian rural life, its historicism and the importance of its ornamental and decorative tradition.

The ‘izba‘, the small wooden house, represented an important link to peasant life and romanticism and had a double influence on the shaping of salt chairs.

Salt thrones are well known in the older Russian welcoming ceremony. When entering as a guest through the door, you were invited to a piece of bread and salt,  often from a throne in silver in the shape of a chair or throne.

The back of the throne evokes the classic izba, the small wooden house of Russian rural architecture, which you can find nearly anywhere in the northern part of that country. 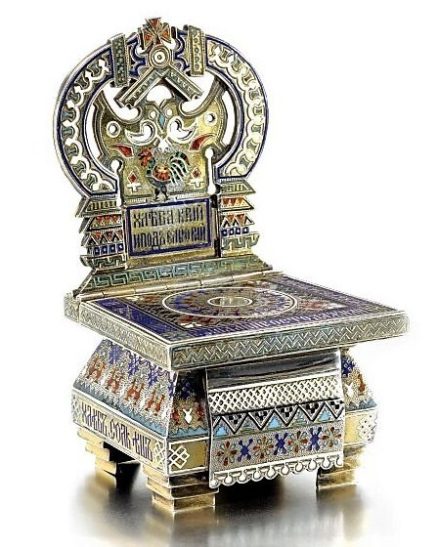 Holes on the back of the seat represented the windows on the house front, while the superior edge evoked the characteristic undulating finish of Russian ‘isbas’. 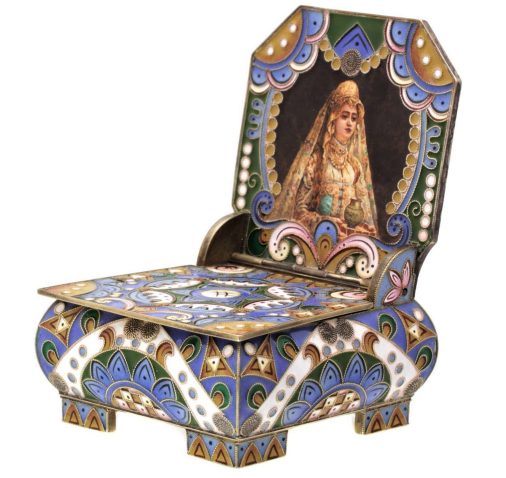 The chair had a container under a lid where the salt was kept, and the salt space was most often gold plated to protect the silver from corrosion.

The back side of the throne has usually a most refined look as, opening the salt cellar, the view of the front side is covered by the seat.

The salt throne became a standard repertoire of clever silversmiths at the turn of the century, adopting innumerable and seldom duplicated shapes which today can be valued up to five thousand dollars or more.

Salt thrones information and images can be found across the Internet.