Steinlen had a love of art from an early age and attended art school in his native Lausanne. 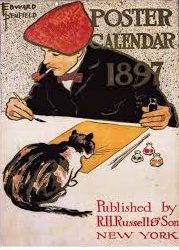 Living in Montmartre allowed him to meet the leading artists and writers of the day who often frequented the club Chat Noir.

In Paris he began to illustrate various magazines and books by Guy de Maupassant and Anatole Frances.

His love of cats and their world inspired marvelous artwork circling the aloof creature, much to our enjoyment.