This is a little bit Sunday Evening Art Gallery post, a little Humoring the Goddess post. You’ll see what I mean.

I am a sucker for those “10 Things You Didn’t Know About …..” Most of them are flops, but every now and then I come across something that is extraordinary.

Before his death, Utermohlen created a heart-wrenching final series of self-portraits over the stages of Alzheimer’s, which lasted roughly five years.

The last self-portraits, painted between 1995 and 2001, are unique artistic, medical, and psychological documents. They portray a man doomed yet fighting to preserve his identity and his place in the world in the face of an implacable disease encroaching on his mind and senses.

Alzheimer’s symptoms not only include memory loss or dementia and personality changes but it also affects the part of the brain, which is responsible for visualizing capabilities, so crucial for a painter.

With Alzheimer’s progressing, the art becomes visibly more abstract, blurrier and vague, due to the loss of the aforementioned capabilities.

The artist’s widow Patricia explains exactly why these images are so powerful:  “In these pictures we see with heart-breaking intensity William’s efforts to explain his altered self, his fears and his sadness.”

Apart from portraits, still lives and drawings from the model, Utermohlen’s art can be arranged in six clear thematic cycles: The “Mythological” paintings of 1962-63; the “Cantos” of 1965-1966 inspired by Dante’s Inferno; the “Mummers” cycle of 1969-1970 depicting characters from South Philadelphia’s New Year’s Day parade; the “War” series of 1972 alluding to the Vietnam war; the “Nudes” of 1973-74; and finally the “Conversation Pieces”, the great decorative interiors with figures, of 1989-1991.

William Utermohlen died March 21, 2007. The mere thought that this artist tried to paint his being through the very end of his Alzheimer’s pays tribute to the creative soul in each one of us.

More of William Utermohlen’s story and paintings can be found at Bored Panda and Chris Boïcos Fine Arts websites.

I think of college dorm rooms with Escher posters on the wall, symbols of pop culture, statutes of intricate confusion and (no doubt) sources of psychedelic contemplation. They were the kind of images you were supposed to look at and see if the fish move or if the stairs go anywhere. And if you stared long enough, your whole world tilted sideways. 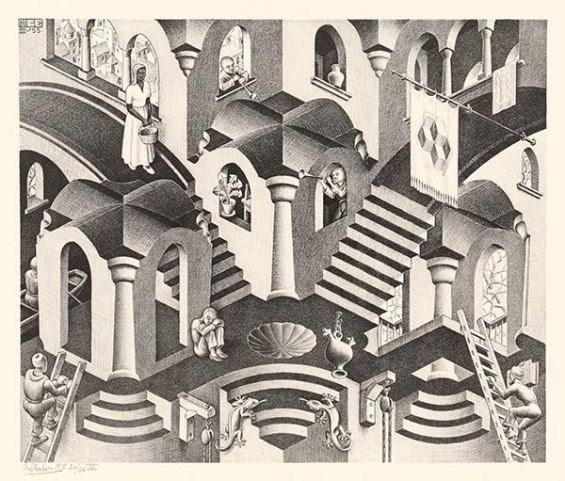 As an adult I have revisited his world of lithographs and woodcuts and wood engravings, and have discovered a delightful new way to look at the world. 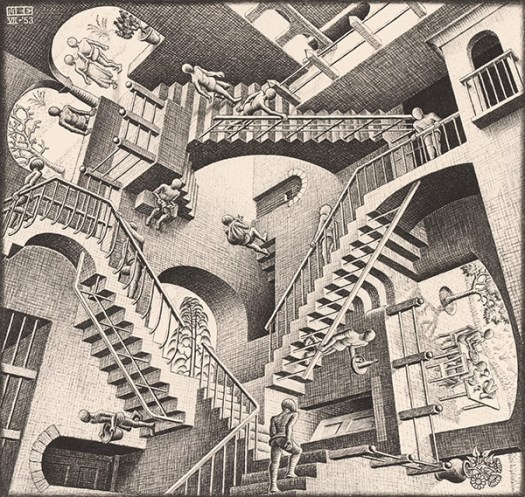 Maurits Cornelis Escher (1898-1972) is one of the world’s most famous graphic artists. During his lifetime, he made 448 lithographs, woodcuts and wood engravings and over 2000 drawings and sketches. These feature impossible possibilities, explorations of infinity, and the magic of mathematics. 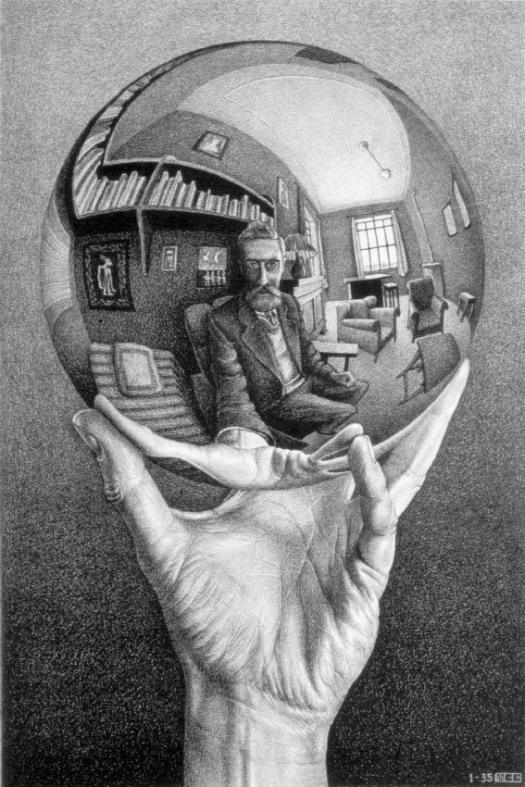 Art like this is done every day by those familiar with computer graphics. But the curved perspectives, the stairs to infinity, the play of light and dark, were sketched at the turn of the century. Which, to me, makes it even more fascinating. 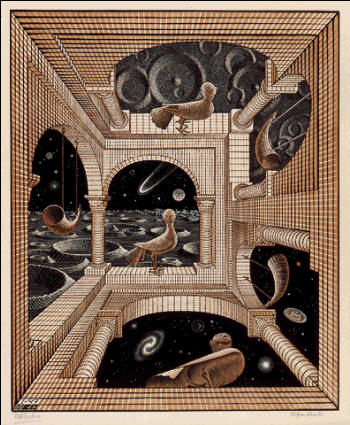 When you stop and look — really look — at the thought and planning that went into the impossibilities in Escher’s work, it makes you appreciate his work even more.  Where do those stairs really go? Which angle am I supposed to be identifying with? Is it a fish or is it a bird? 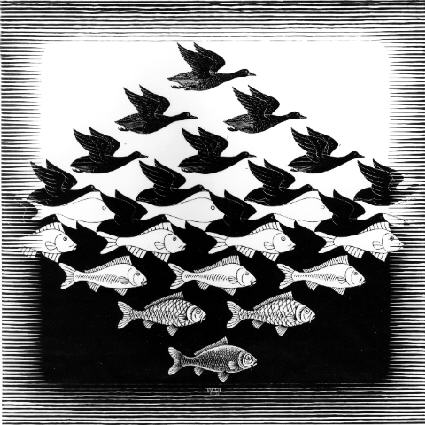 Minds like Escher’s work in the fourth dimension. It’s as if they look down at the world from a strange angle and record what they see. 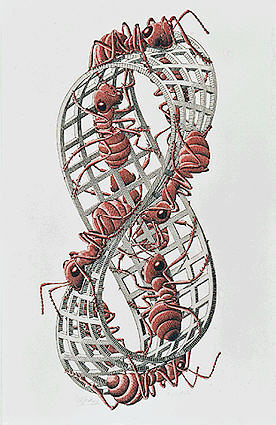 Take some time and visit Escher’s official website, http://www.mcescher.com.  You will find yourself wandering through gallery after gallery, wondering how a human mind could be so creative yet so spiral. Take a few moments and just look at the artwork — you will be enchanted by his point of view, and lost in his sketches. 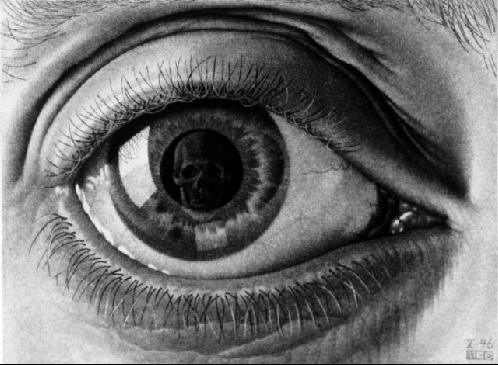