Chemistry Cat, also known as Science Cat, is a series of puns and science jokes appearing as captions around a cat behind some chemistry glassware wearing black rimmed glasses and a red bow tie.

While the source of the image remains a mystery, it is likely a stock photograph, possibly of Russian origin.

This wonderfully serious cat with a quick wit has changed the face of Chemistry.

And isn’t that the purpose of Art?

To bring enjoyment and a smile into your life? 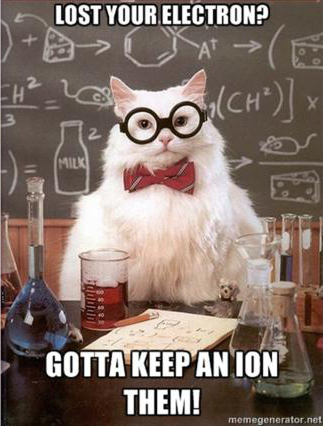 I came across an article the other day that confirmed what I’ve thought all along. According to J.K. Rowling, Hermione should have ended up with Harry Potter, not Ron Weasley. (http://time.com/3680/j-k-rowling-says-hermione-should-have-ended-up-with-harry-potter-not-ron/ )

Although I LOVE the books (and the movies), I could have told you that there was never any real chemistry between Hermione and Ron. None. Opposites attract, you say. Looking at my husband and me, that could very well be true. He’s logic, I’m pretzel. He’s smart, I’m trying. He has the patience of a saint, I would rather stand and complain and fidget. But seriously. Hermione was smart, resourceful, and outgoing. Ron was dull, jealous, and a little thick. Hermione sparkled every moment she was around Harry. Her sparkle was practically non-existent around Ron. I mean, anyone who read the books could see that. So it made me start to think.

What other characters in books and/or movies should never have gotten together?

The revised, re-pumped Star Trek movie franchise. Spock and Uhura? Naw. Even if he does dip into his emotions now and then. She’s so smoldering she should be in her own spaceship. Indiana Jones and any of his female co-stars. Was there really any hachacha between any of them? And don’t say it was more of a satire/drama. So was The Mummy. And Rick and Evelyn O’Connell made danger take a back seat to hot teasing.

J.K.’s admission also made me take a look at my own characters. Book One and Book Two: the same two stars. Book One the heroine doesn’t get the hero because she’s busy trying to stay alive. Book Two she goes back to look for him and they spend most of the book dancing around previous commitments. My third novel is more an independent-woman-in-a-situation sort of book, romance more a hint than a possibility. (I may have her connect with the hero in the sequel).

Maybe I’ve been skirting the real issue – chemistry. a.k.a Sex. Admit it. Sex sells. Chemistry makes you want to strip off your clothes and get shamelessly amorous. Like you can’t keep your hands (oh..and mind) off of the other person. But we all know there has to be some kind of depth behind the chemistry/sex to make it last more than one night. Harry and Hermione were always hugging, touching, and adventuring together. There was never any such show of affection between Hermione and Ron. Actually, Ron was more of a third wheel (as was Ron’s sister who wound up with Harry).

But all this is hindsight. J.K. had a real belief in her pairings, and it was up to the reader to see her world as she did. And hers was a delightful world to get lost in.

So I wonder. Do you have books or movies where the pairings have been less-than-satisfying? Have you seen coupling that doesn’t really make sense?