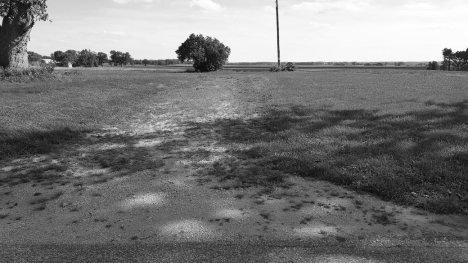 Strange things happen around you whether you notice it or not.

Last evening was one of those times.

I take the backroads to and from work. They are filled with fields and farms and a house now and then. The drive strips away all my crummy moods left over from work, and I come home a clean woman, ready for the evening.

The road itself makes three “S” turns, giving you a view of three different directions. Just after the third “S” is a huge field except for one acre that was carved out for a farmhouse. I remember when I first started working 15 years ago there was a white house on that lot and a big, dilapidated barn across the street.

I remember a kid riding a go-cart through the levels of the barn, a little old man laughing and watching him. It was a long time ago, but the memory stuck, so I wrote a short story about the old man and his ghost still walking the territory.

The house is gone now, as is the barn. The barn’s acreage has been replaced with fields of corn or soybeans, the house’s lot empty, yet mowed every year. I think about the little man every time I drive by, often giving a nod to the land he once called his.

Yesterday I made my daily morning trek past the empty parcel and there was a black truck parked on the cement triangle that used to be a driveway. I thought that odd, for there’s never anyone around that time of the morning, especially there.

Last night I was driving home from work when I was stopped by a car in the middle of the first “S”. He asked me to take an alternate route because there was a “matter” down near Freemont Street, the end of the third “S”. Dutifully I took the horseshoe around the countryside until I came to the junction of that road and the end of the last “S”.

You know how you sometimes get a feeling of foreboding out of nowhere?  I looked down the end of the “S” and there was yellow caution tape wrapped all around the old man’s acreage. Flashing lights blocked the road, and there was the same black truck parked back further on the road.

Had the old man come back to look for his house that wasn’t there? Did someone make a sacrifice on my sacred land? Did one of his decedents commit suicide there? Or was it merely a gas leak?

I haven’t found out what happened, and don’t know if I ever will. But I feel as if someone blasphemed on that special place where the ghost of the old man still wanders.

Maybe I don’t want to know.

Like the visit to my old homestead, time changes things. Keep the memories and the inspirations of your first experiences and hold them close. For what comes out later is never the same.

For the past becomes nothing but ghosts in the night.